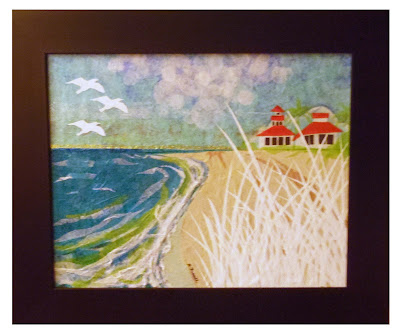 Boca Grande Beach and Lighthouse is a 16" x 20" mixed media collage on canvas that is framed in black.

To create this piece, I added multiple layers of blue and white tissue paper to create the sky and clouds, then blues, greens and white for the ocean and ground cover, white for sea oat grass and seagulls, tan for sand, and a red roof for lighthouse. I topped the collage off with may colors of glitter to provide motion for the water. I then sealed the completed piece with a UV protectant.
Boca Grande is located on Gasperilla Island in Florida, on the Gulf of Mexico. I have had the opportunity to visit this beautiful place and can understand Wilma's interest. Visit http://www.bocagrandechamber.com/ for information on this island.
_________________________

Obituary of Wilhelmina Gronso -
Wilhelmina Gronso, 95, of Dunlap, Tennessee, died on Tuesday, January 3, 2012.
She was born in Kalamazoo, Mi., on October 21, 1916. Wilma moved with her family toAmsterdam, Holland where they lived for six years.
In 1939 she married Peter VanDyken, Sr. who preceded her in death in 1965. In 1979 she marriedGeorge Gronso who preceded her in death in 2005.
Wilma enjoyed her retirement years in Port Charlotte, Fla., and Dunlap. She was alsopreceded in death by parents, William and Dorothy Lucking; three brothers andone sister.
She is survived by her son, Peter (Ann) VanDyken, Jr. of Dunlap; three grandsons, Michael (Kim) VanDyken, Dunlap, Daniel (Dulce) VanDyken, Grand Rapids, Mi., and Peter (Jean) VanDyken III, Kingsley, Mi.; two stepgranddaughters, Sara (Shawn) Stiger and Angi Weigel, both of Dunlap; 13 great-grandchildren; nine great-great-grandchildren; a dear friend, Dollie Driver of Muskegon, Mi. Online condolences can be made at http://www.reedfamilyfh.com/. Arrangements are by Standefer-Reed Funeral Home, 50 May Road, Dunlap. Memorial services will be held at a later date in Michigan. __________________________________________________ 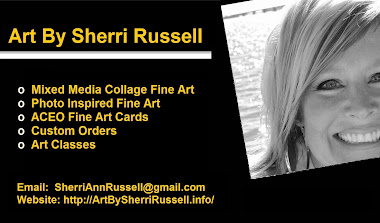 She's So Fly
As an Outdoor activity promoter to women and children, I like to reach people through photography, fishing and other outdoor activities, fine art, article writing and websites

Find a photographer nearby